Well control should be a standard, not part of the competitive space

Cansco: Industry must address gap between real-world requirements for safer operations and current ways of operating 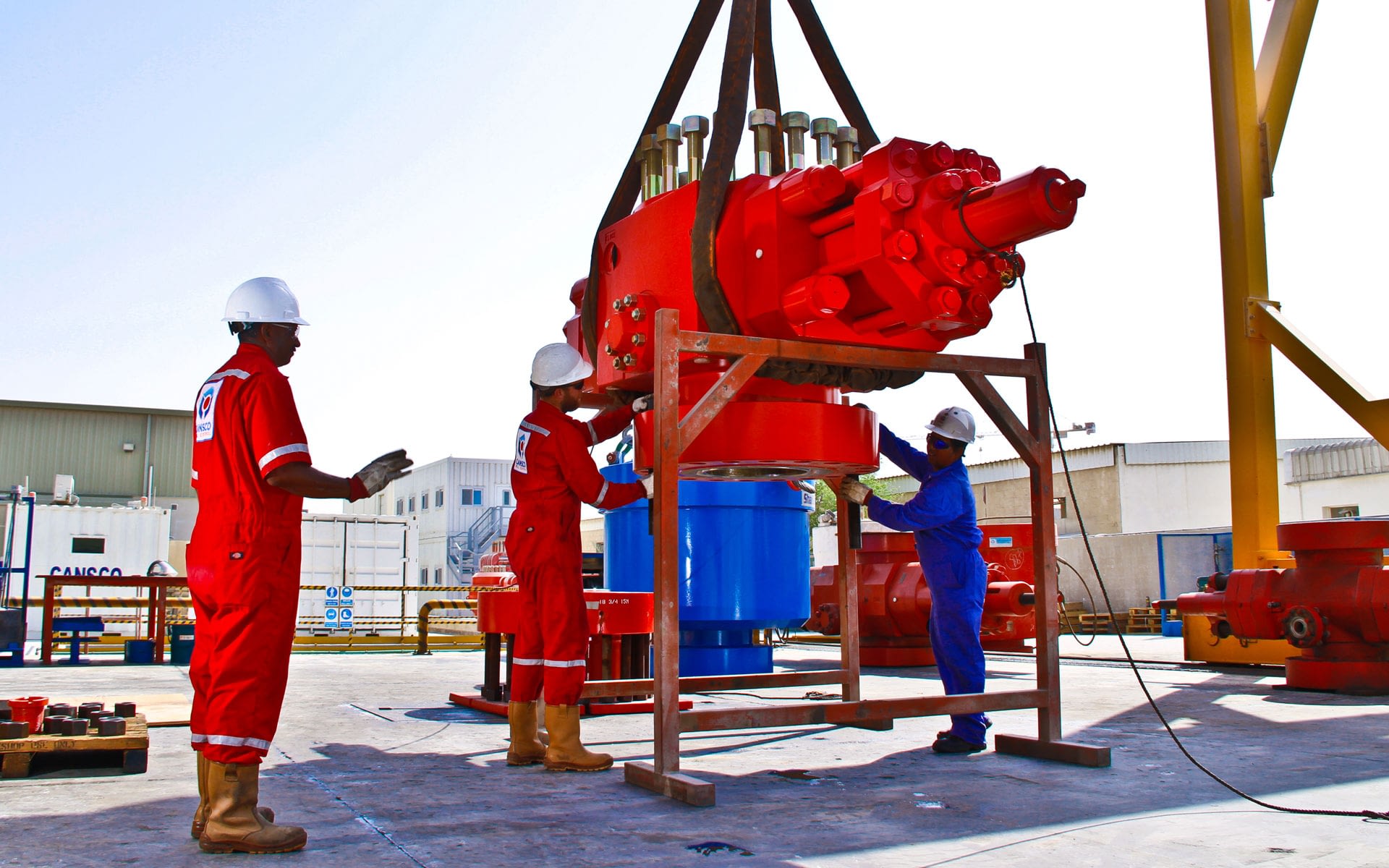 Mike Simpson is CEO of Cansco Well Control. He also serves as Secretary of the IADC Southern Arabian Peninsula Chapter.

Given Cansco’s primary focus on well control solutions, what do you consider the industry’s greatest challenge in this area? The greatest challenge in well control is working to a consistent standard. We have a standard but no standardization. API Standard 53 was introduced in 2012, but its impact is still inconspicuous, in my view. Post-Macondo, the industry decided it needed to improve and put a standard in place, but then left the industry players to adopt it. There’s been little standardization in its adoption, and the range of interpretation around Standard 53 is concerning.

Competency is another major challenge. Around the Arabian Peninsula, there’s been significant rig activity in recent years. Operators have been adding more rigs, the workforce has been expanding rapidly and average competency levels have been diluted as a result, especially in critical supervisory positions. Unfortunately, the rig and wellsite environments do not match the average new rig hand’s expectations. Today’s new-hires are different from previous generations. People tend to have greater expectations now, and managing those expectations to achieve the required attitudes and behaviors at the worksite is a challenge for every organization.

Is industry’s approach to well control balanced among the entire rig fleet? A technician inspects and services a rotating control device (RCD) at a Cansco workshop in Dubai. The RCD is integrated with a rig’s existing circulating system to help reduce risks to personnel and the environment. Mike Simpson, CEO of Cansco Well Control, said he believes every rig should “have a closed-loop circulating setup with at least the addition of a flow diverter.”

The problem is, there are people working on all types of drill floors on all types of wells all around the world, but as they work around their open wells, they all share the same uncertainty – is this gun barrel like conduit about to unload? It’s the 21st century, and it’s unacceptable to me that people should still be directly exposed to the potential hazards of an uncontrolled release from a well.

The purpose of well control technology is to cover both sides of a loss event – on the proactive side to improve the monitoring and to reduce the potential for an incident, and on the consequence side to allow a more effective recovery response. We see bigger rigs at one end of the spectrum adding riser-gas handling equipment and closed-loop MPD systems. Why, then, at the other end of the spectrum, shouldn’t a little hoist rig in Oman also have a flow diverter and more up-to-date flow monitoring and fluid monitoring so that it also can be more proactive in identifying a kick hazard and have suitable time and a safe environment in which to respond?

The days of oil and mud gushing through the rotary table should be a thing of the past for everybody that works on a rig, but it’s still happening. The guys on the drill floor should not be exposed to uncontrolled releases of mud, oil, gas and noxious gases. It’s generally a very simple solution to add a flow diverter, but still they have not been implemented across the worldwide fleet. Technology that came through the ’80s and ’90s – drill floor automation and pipe handling – targeted faster, safer drilling and taking the man out of harm’s way. That’s fine when you have highly mechanized rig fleets, but when you go to places where the mechanization level is basic, you cannot take the man out of harm’s way; you have to take harm out of the man’s way. That’s where the technology has to be adopted for well control today.

You said you believe API Standard 53, Blowout Prevention Equipment Systems for Drilling, has had little impact. What more needs to be done?

I know that some contractors and operators have gone to extensive lengths to raise awareness of Standard 53 within their organizations. As an industry, however, we’re not getting enough awareness to the front line. It’s not about being able to recite Standard 53; it’s about knowing that this industry has a standard for well control and knowing how to use well control equipment, how to adopt these practices and then actually working to this standard. I think there have been changes in well control training, but it’s still missing a practical edge. That’s essential for rig personnel.

Most people in the business are not aware that well control incidents are happening at least weekly, if not daily, around the world. The only reason you don’t hear about them is because, at some point in the response, they managed to keep it under control. Because we don’t talk about these mistakes, the average personnel is not aware of how often it happens, and the industry loses the opportunity to see the full extent of the issue and act accordingly.

What barriers are holding the industry back?

The primary barrier is cost. For example, look at Dubai, which is a logistics hub for goods and people. It’s an ideal location for a training facility in the region. There are good courses around, and they don’t cost very much. These courses are essential for rig crews, but they’re not listed as essentials in the contract. If something is not a contractual requirement, it generally doesn’t get sanctioned. If a few hundred dollars is a barrier, it really underscores the issue of providing only what the contract says. There is a gap between what’s required in the real world to make things safer and how the industry operates right now.

Another barrier is the prevailing need for speed, which demands that the bulk of performance improvement attention be given to what makes the well activity go faster. This mind set draws focus from those areas that contribute little to how fast a well is drilled, such as the BOP.

Then does the solution lie in having contractual requirements? Besides relying on flow monitoring and alarms for kick detection, the industry also relies on rig-site personnel to interpret signs of a kick and to react appropriately. Training courses should focus on how to recognize and respond to those signs.

An operator contracting for a rig will try and get it at the best price. Contractors compete for that work, and the well control equipment is part of the equipment package supplied. Therefore, it’s part of the competitive space. Well control should not be in that competitive space. It should be a standard. Well control equipment and the training required for it should be treated differently when it comes to competing for a contract. The BOP, the use of the BOP and the competency of the personnel carry such critical importance. Let’s not fight about price when it comes to well control.

The industry traditionally detects kicks with flow monitoring and alarms. However, flow alarms are not always reliable. People are also not always reliable, and interpretation of what’s happening in the well is a big issue. New technologies are being applied to give rig site personnel more data about what’s going on, but that’s just more data. The personnel still must be able to interpret and react appropriately to the signals.

We need a two-pronged approach: better equipment to provide better data, and better interpretation skills to recognize the early signs of a kick and be more proactive. A fancy new screen or a fancy new flow monitor is not enough. You still rely on people to do the interpretation. Well control courses should spend more time training people to interpret how a well talks and to interpret the signs. Well control is not just for when you have a bit on bottom; it’s during all drilling activities, including pulling pipe, running pipe, testing pipe and setting tools. A kick can happen at any time, and personnel must be able to interpret what’s happening at all stages of a well.

Beyond training, what do you see as the next step-change in operational integrity and well control incident prevention?

The step-change I would like to see is for every rig to have a closed-loop circulating setup with at least the addition of a flow diverter to current rig-ups. It’s a simple piece of equipment that sits on top of the BOP, and it channels all returning fluids safely to the mud pit or to another safe area. It also facilitates enhanced flow monitoring, and it diverts any release away from the drill floor. This is effectively being done on deepwater projects, but why shouldn’t it be done on the little hoists, too? It’s not a great cost for the significant benefits.

Every rig conducting activities on a well that uses a BOP should have a flow diverter on top of it to protect the people. When you can better monitor the well as you’re directing the flow cleanly away, you can get a more accurate message about what’s going on.

Since Cansco is based in Dubai, what well control challenges do you see specific to the Middle East?

Some national oil companies in this region have raised the bar on major inspections of BOPs. Typically, well control equipment is sent to an authorized workshop for a major inspection every five years. However, national oil companies like Saudi Aramco and Petroleum Development Oman have said they think five years is too long. This is putting significant burden on the workshops in this region because they have a large turnover of well control equipment. A drilling contractor with a contract for five years will have to send its well control equipment to an authorized shop after some three years, and they will have to replace it with rental or a spare.

This has significantly increased the cost of compliance in this region. And as fleet sizes increase, there’s more and more equipment sitting at workshops, and lead times for recertification are getting longer.

Why have the NOCs reduced the time between recertification?

They were getting data showing that when BOPs were being sent to workshops every five years, the percentage that needed major repairs was very high. Effectively, this means they weren’t fit for work prior to being removed from service.

This issue goes back to competence. Why would those BOPs need such major repairs? It’s because of the way the equipment was used and maintained in the field; it means that safety-critical equipment likely wasn’t treated very well. You need competence in order to maintain and use equipment properly. There’s no need to send it to the shop after three years when you can send it after five years or even longer if you have data that support that the equipment is within specification and continues to perform reliably. Standard 53 allows contractors to do that, but you must have a database of reliability to back it up.

Have falling oil prices affected operations in your region?

So far the activity level in this region remains fairly steady and, in some specific areas, continues to increase. However, the lower-cost base in the region means any impact of lower oil prices will generally lag that of other higher-cost base areas. It might take a little bit longer to hit the oilfields here. Only time will tell.

We use cookies to ensure that we give you the best experience on our website. If you continue to use this site we will assume that you are happy with it. Privacy policyOk